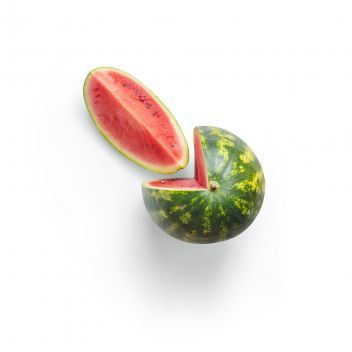 The watermelon is a plant native to tropical Africa, already known by the ancient Egyptians and widespread in our country in the early Christian era and now spread throughout the world; its fruits are full of a very watery, sweet and thirst- quenching pulp. In Italy, it is grown in the open field on approximately 18 hectares of soil, worldwide this number reaches 1 million 500,000 hectares.

The annual herbaceous plant consists of a stem that branches out quickly, producing other stems trailing along the soil, a few metres long.

Watermelon is an energy fruit thanks to its high content of vitamin B6 that stimulates serotonin production. The magnesium gives strength and energy to our cells and is very low in calories.

It also contains citrulline, an amino acid that prevents hypertension and heart disease; it also has anti-inflammatory and anti-oxidant properties.

The watermelon weighs between 2 and 15 kg when fully ripe, it is spherical or lengthened a light or dark green colour or with streaks of two colours on the outside, the pulp is generally red, and it requires a minimum temperature of 15°C. It is sown late spring (April-May) and the fruits will be ready to harvest 4 months later, in high summer.