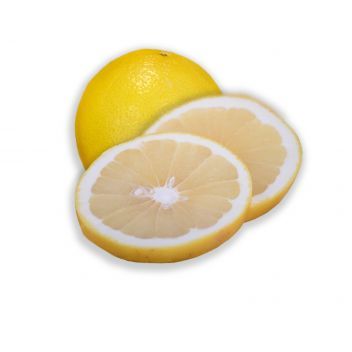 The Grapefruit belongs to the Rutaceae family; it is a natural hybrid, originating from Central America.

Cultivated since the mid-19th century in Florida, from there it began to be exported and spread to Argentina, South Africa and Israel.

It was imported into Italy around the end of the 1960s, and cultivated primarily in Sicily.

The plant is very sturdy and can reach up to 15 metres in height, the shape is rounded and the foliage a rich dark green colour.

The flesh is juicy and pigmented, bitter acidulous, usually yellow or pink-red in some varieties. The seeds are white and polyembryonic.

The predominant flavanone in grapefruit is naringenin that has antioxidant and anti-tumour properties.

The most widespread variety of grapefruit is the Marsh Seedless, with a yellow almost transparent flesh. The plant starts to produce fruit from the fourth year and reaches full production in the sixth year. There are three ripening periods: early (October-November), mid (December-February) and late (March-May). It is eaten fresh and also used in the citrus industry to produce juice.